Introduction and Overivew of the adidas Ultraboost 22 Running Shoe

You could argue that adidas changed the midsole landscape when they introduced their adidas Boost midsole foam. It was perhaps the first "next generation" foam that challenged an industry making mostly EVA foam midsoles. Of course, technology moves on and adidas Boost competes with newer options like PEBA foam with carbon plates and EPU foams that aim to reduce weight while maintaining responsiveness.

With the focus on making the Ultraboost 22 a running shoe, adidas introduced new tech to improve response and energy return. The main feature is the new "Linear Energy Push" (LEP) system to increase rigidity in the forefoot. The Ultraboost 22 running shoe also features a new material in the upper, dubbed "Primeblue" made from recycled Parley Ocean Plastic.

Starting with the Ultraboost 21 adidas made a serious move forward for the series as a running shoe. The Ultraboost 22 maintains all those improvements, and adds a few new ones. If you liked the 21, then the 22 will not throw you any curve balls. It maintains adidas' focus on creating a premium running shoe. Weighing in at 12.5-ounces, this will not compete with lightweight racers, and positions itself as a maximal daily trainer. Best for medium to long runs, and especially useful if you want the extra cushioning the Boost foam provides.

Fit and Materials of the Upper 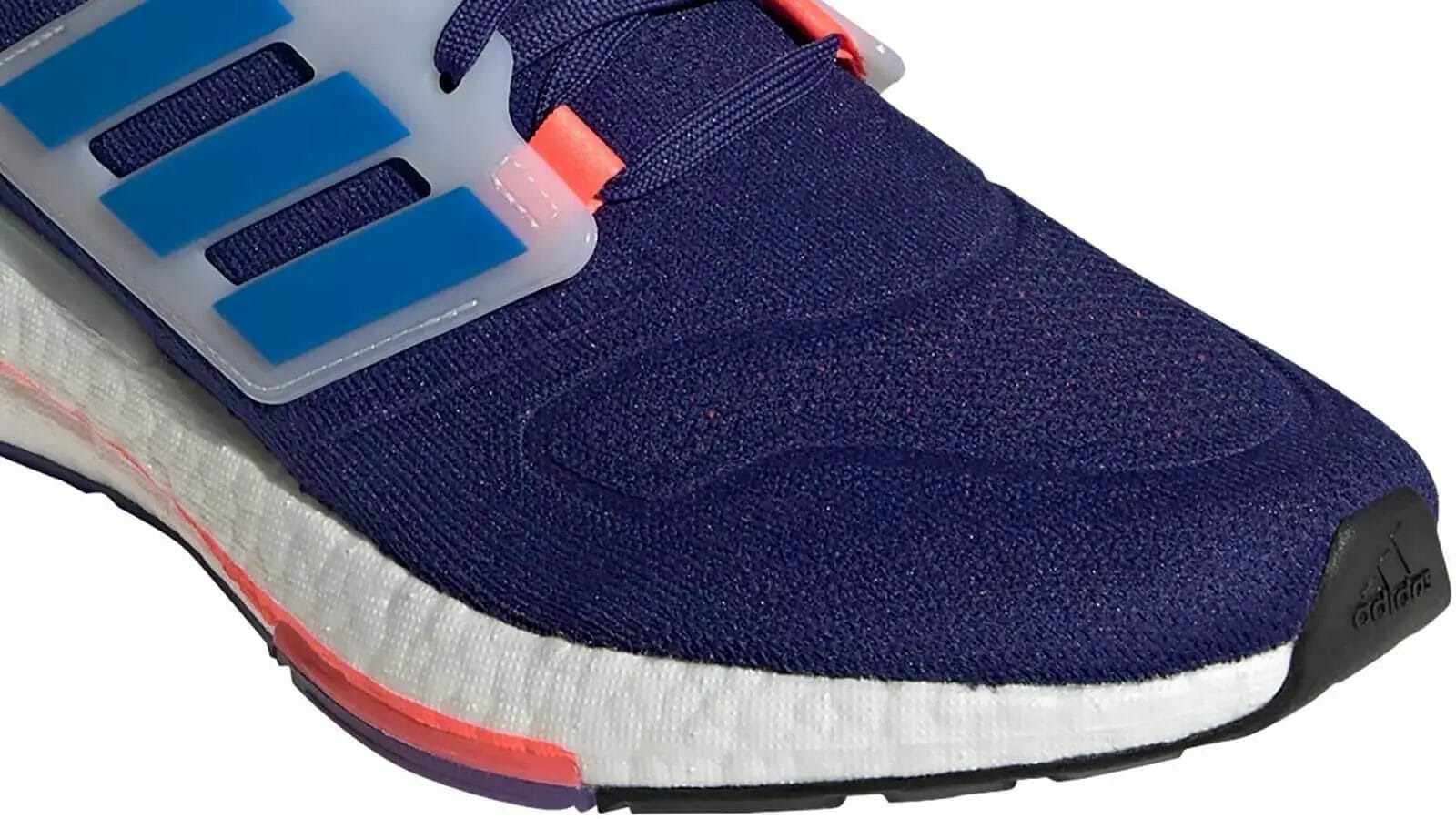 Like almost all adidas shoes, the adidas Ultraboost 22 features a shallow toe-box, and a snug, narrow fitting forefoot. For as long as we've written reviews, these features remain consistent across the adidas brand. So, if you like the way adidas shoes fit, you'll probably like these. If you don't like the way adidas shoes fit, then this shoe won't change your mind. For us, the snug fit feels good and adds to the comfort of the shoe. If you have wider feet it might not work for you.

The Primeknit upper holds the big toe in place, while the narrow width on the sides holds the entire forefoot firmly in place. They do not offer the Ultraboost in wide sizes.

Also, keep in mind that adidas designs the Primeknit upper to fit tightly to your foot. This takes a good 10-15 miles to break in fully. So expect a little tightness as you're just getting used to the shoe.

The ventilation levels don't stand out either way for us. The tight, stretchiness of the upper makes the circulation feel a bit better, but the difference is only barely noticeable. 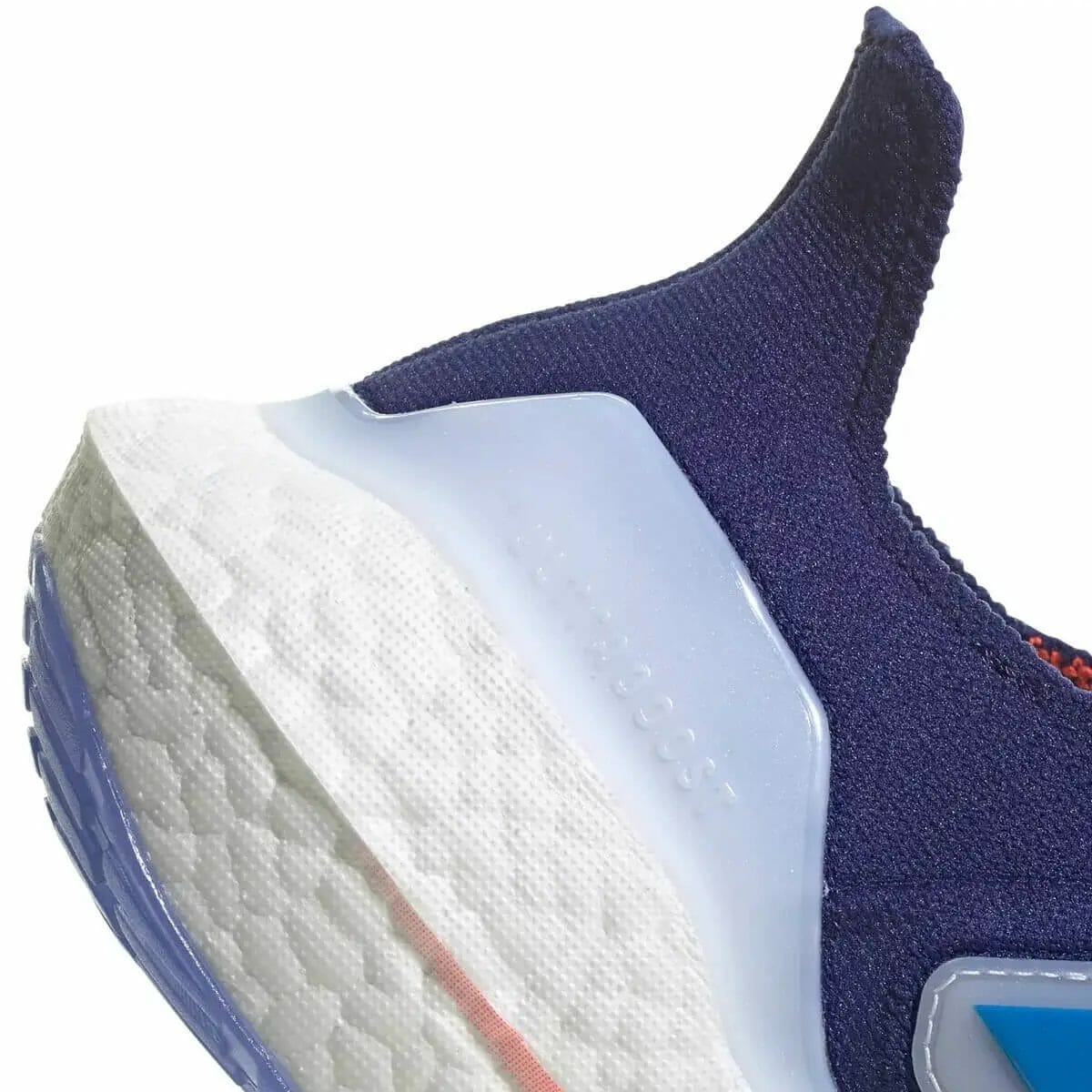 The Ultraboost 22 fits true to size, but might feel slightly shorter because of the shallowness in the toe box. If you're right on the edge of a size, then we'd suggesting rounding up, rather than down. However, don't overdo it, since having a longer than necessary size can detract from your runs.

They've narrowed the heel to help with fit at the rear. Most women have a narrower heel than men for the same shoe size, so this helps keep it in place. Further, some complained in previous versions that the sock-like upper could bunch up in the midfoot. To address this, adidas brought back a soft rubber cage around the midfoot with improved lacing and a better fit. This helps to improve the feet for female runners. These changes prompted us to add the Ultraboost 22 to our list of the best running shoes for women.

If you just look at the Ultraboost 22, you might think that the midsole is massive. In reality, it's a bit deceptive looking. The rearfoot has substantial sidewalls have an exaggerated flair to them that cups around the foot. The actual stack height is a more normal 30.5mm. If you just look at them from the outside, it appears to be around double that height! Hopefully you can see what we're talking about in the next picture of the heel and rearfoot area. 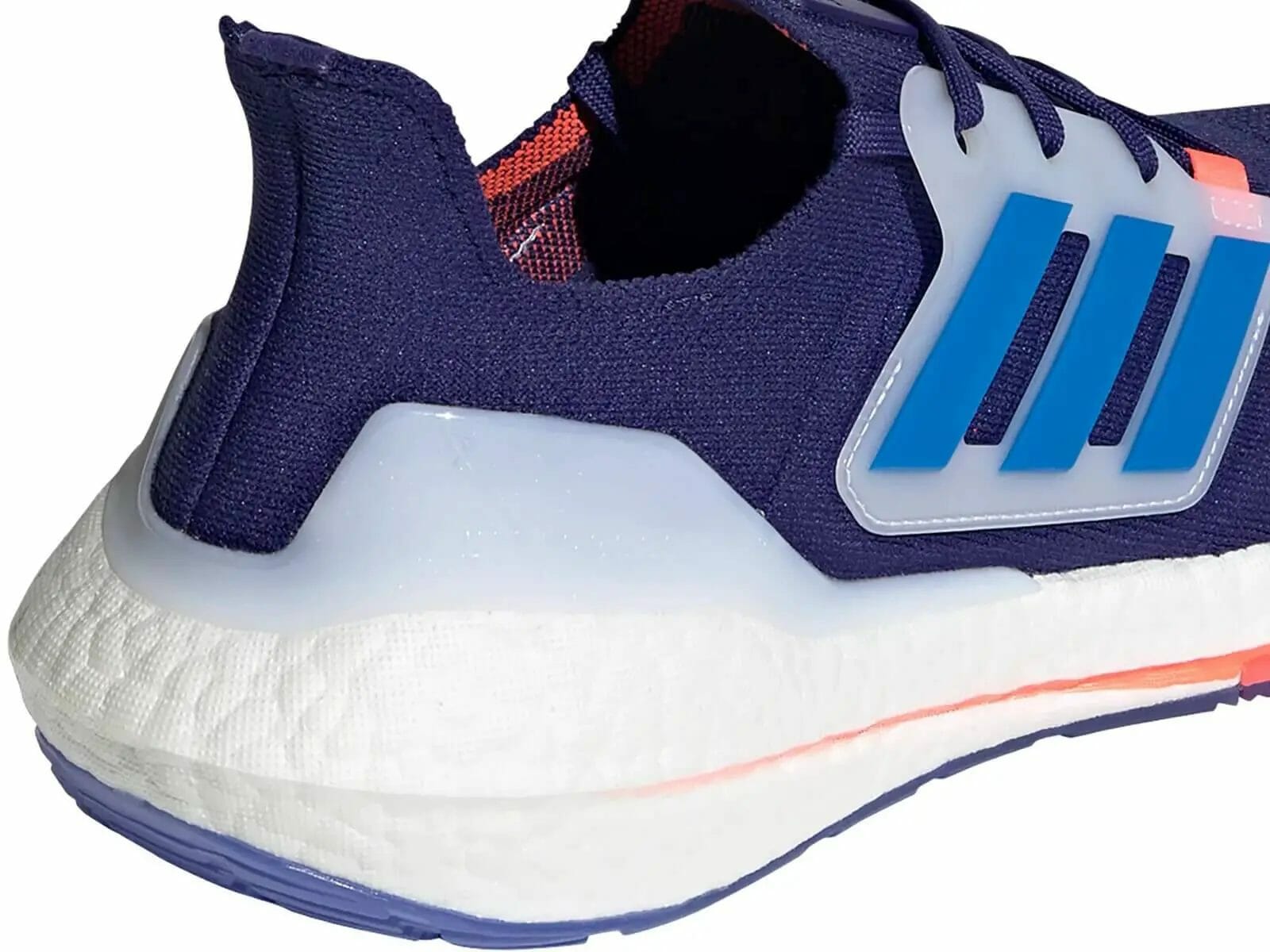 The outsole and torsion shank in the Ultraboost 22 is virtually identical the 21. The next couple of photos give a good look at the outsole geometry. There is also a close up of the torsion shank that forms part of the LEP technology.

Translucent Continental rubber covers almost the entire outsole. Gone is the lattice-like design that exposed some of the Boost foam from the midsole. The rearfoot area has some exposed foam. However, it's a small area in the rear foot surrounded by solid outsole with limited flexibility.

The geometry of the outsole carries over from the 21, and is a runner-friendly design. The earlier versions of the Ultraboost featured a grid-like "Stretchweb" outsole. The old design was less than ideal for runners. The new geometry has thick continental rubber that has an enclosed loop around the transition groove.

Even on wet or roads or paths, the outsole offers excellent traction. Also, adidas added a separate piece of rubber mounted over the Boost foam under the forefoot. This helps with traction and stability. One complaint we have about this additional piece is that it can give a slightly lumpy feel under the forefoot. This is more noticeable on higher tempo runs.

We didn't find this uncomfortable exactly, but it was a noticeable feel underfoot. Something that's worth paying attention to if you test out this shoe. It's the sort of thing that you stop noticing after wearing the shoe for a bit. However, we could see it bothering some runners who want an ultra-smooth feeling underfoot. 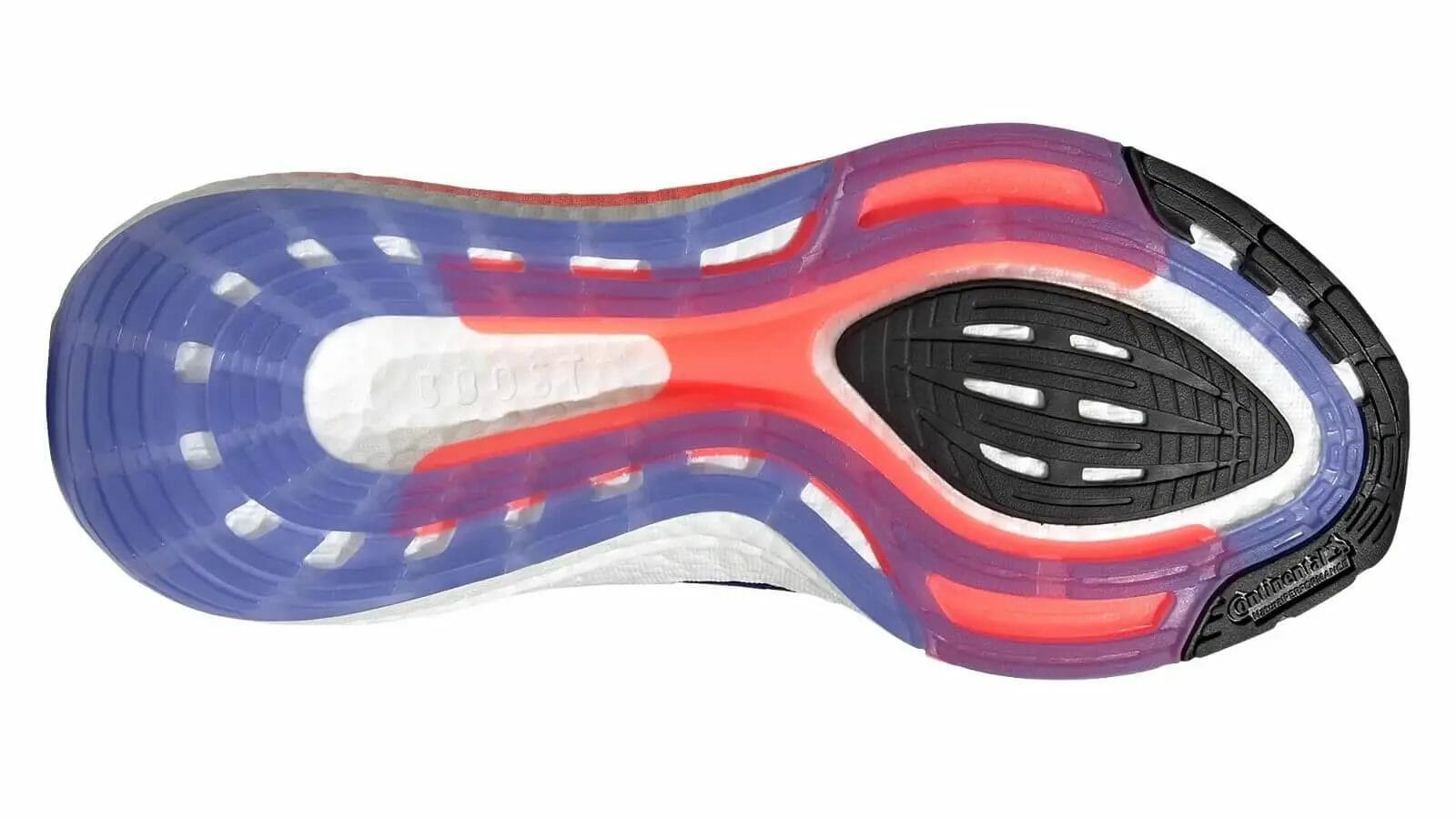 One of the most noticeable changes during the evolution of the Ultraboost is the stability the shoe offers. This stability, along with Boost foam, is a reason we list this as a top choice for runners with plantar fasciitis.

The taller than normal heel sidewalls allows the midsole to form a supportive "cup" structure around the heel and midfoot. The rigid heel clip along with this cupping structure makes the rearfoot extremely supportive. This helps with plantar fasciitis, and also with heel and Achilles pain for some runners.

In addition to the wide midsole base, the structure of the outsole features a transition groove and an oversized shank. This centers the weight and improves the efficiency during loading. This allows the rearfoot to maintain all the cushioning you expect, while improve performance substantially. 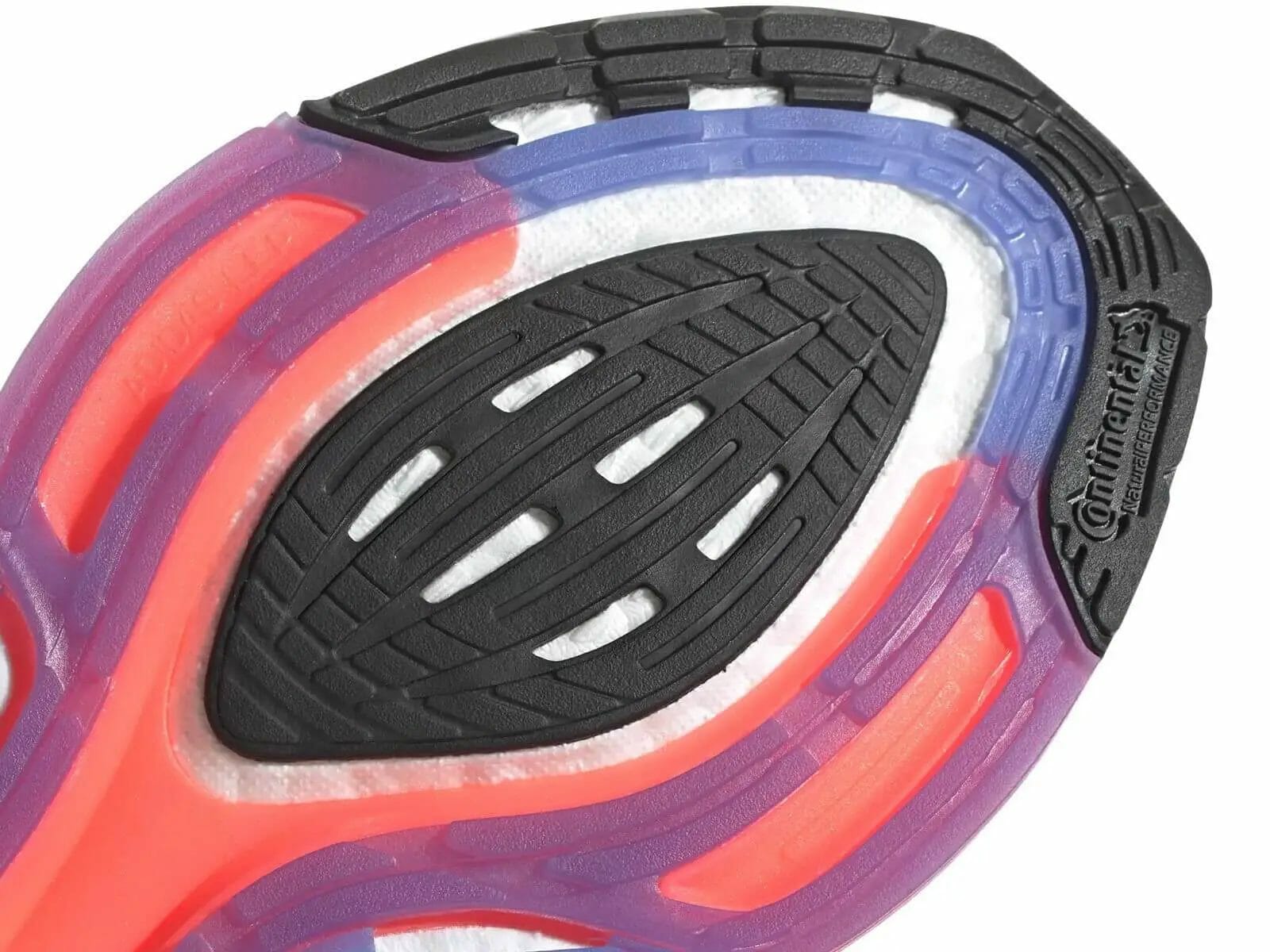 One of the drawbacks of heavily cushioned midsoles wit soft foam is that they often have unresponsive transitions. This results from the lack of structure and stiffness throughout the midsole that prevents a snappy heel-to-toe transition.

The Ultraboost avoids this trap. The extra large shank (the LEP) has thick rubber on the outsole that adds rigidity from the midfoot to the toe. This allows for a much quicker transition. This is the same as the Ultraboost 21. If you liked the ride there, you won't be disappointed.

One big change adidas made in the Ultraboost 21, and remains in place for the Ultraboost 22, is a much firmer ride. A lot of this is down to the outsole design, and how it works together with the midsole foam.

The old Ultraboost models featured a very flexible outsole. This disappeared in the latest iteration of the Ultraboost, causing the midsole to feel much firmer underfoot. Even with plenty of Boost foam in the midsole, the solid rear outsole makes this feel firmer than earlier Ultraboost versions, and definitely firmer than the Ultraboost DNA line.

What you lose in cushioning, you gain in stability. The foot gets firmly planted over the midsole, making the ride feel more neutral and increasing performance. There's also a substantial bevel to the heel design on the Ultraboost 22, helping to prevent the outsole from catching on the ground. This makes the Ultraboost 22 a plausible running shoe for forefoot strikers even with the 10mm heel-to-toe offset.

Pros ansd Cons of the Ultraboost 22

The oversized LEP shank and Continental rubber outsole provide stability and snappier transitions than we generally expect from a shoe with a midsole made from something as soft as Ultraboost foam.

Weighing in at around 12-ounces, this is not a light shoe. It is not ideal if you're looking for something for fast-paced runs or races. Also, like other adidas shoes, this fits rather narrow in the forefoot, and adidas does not offer this in wide sizes. 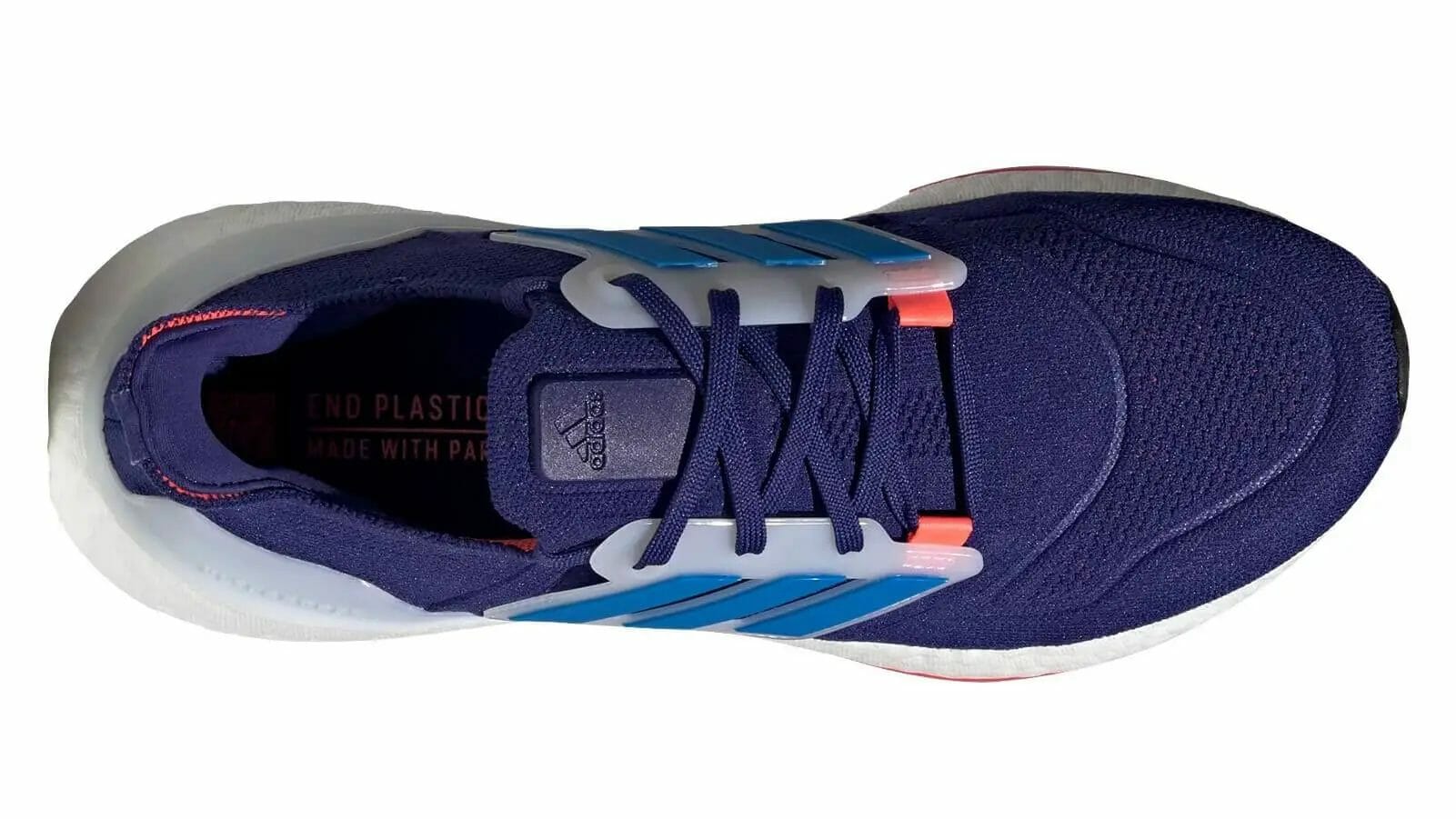 The Ultraboost 22 and 21 feature identical midsoles and outsoles. However, the ride quality does change a bit. The Boost foam in the 22 feels a bit more compressible, resulting in a somewhat softer ride. The 22 is also missing the latticed structure under the insole. This yields a very slight reduction in weight from the 22 to the 21.

The other most noticeable change is the soft rubber cage on the upper and sides of the 22. This eliminates one of the worst design aspects of the 21. The design of this piece in the 21 put pressure on the top of the forefoot that would get painful after ~10 miles. The modifications to this midfoot cage in the 22 eliminate this problem completely.

Other than that redesign, the upper fit and feel are almost identical. There are some new colorways, but that's to be expected. adidas also continues to offer no wide sizes in the Ultraboost, which is disappointing to many.

On the design side, there's also a new two color mesh on the upper. When the upper stretches you can see the alternate color beneath the top layer of mesh. This looks pretty neat, but isn't something we'd base a purchase decision on.

Finally, adidas has upped the price by $10, as everyone else seems to be doing to celebrate 2022.

Alternatives to the adidas Ultraboost 22

The adidas Ultraboost 22 has a few design choices that mean it might not work for your feet. Notably the shallow toe box, somewhat narrow mid- and forefoot, and lack of wide sizing. However, if you want something similar here are a few alternative running shoes that are similar to the Ultraboost 22.

One similar option is the Saucony Triumph. This offers a bit more performance than the Ultraboost, but still features Saucony's Pwrrun+ foam that gives it similar cushion.

If you don't want the additional running features of the Ultraboost 22, the original Ultraboost premise of an ultra-comfortable athletic shoe for daily wear lives on in the adidas DNA line of shoes.

Finally, if you want something a bit lighter and more performance oriented from adidas, we recommend the adidas Solarboost. The Solarboost features a full-length Boost foam midsole, however it has a firmer EVA foam rim around the top. This makes the Solarboost a somewhat more performance-oriented running shoe than the Ultraboost 22.

Summary and Final words on the adidas Ultraboost 22 Running Shoe

The adidas Ultraboost 22 offers a great option for some specific uses. If you want extra cushioning for daily medium-distance runs, and don't mind the narrow fit that adidas offers, then the Ultraboost 22 is a great choice.

The Ultraboost 22 also has an advantage over most options. It works well for slower paced runs, and even walking or simply wearing around for general day-to-day use. It's not a shoe that packs in so many features that they become unusable for anything except intense training runs.

As an all-around running and athletic shoe, we recommend the Ultraboost 22 highly (and more so than the Ultraboost 21). If you're looking for high-end performance, or a running shoe for long distance runs, we'd recommend taking a look at some of the alternatives we mentioned above.

You can find current prices and additional reviews at the following retailers: