One of the most reliable running shoes available, the Brooks Ghost 14 running shoe carries on the tradition of its predecessors in providing a near perfect option for those looking for a supportive neutral shoe for every day training. Introduction and Overview of the Brooks Ghost 14 Running Shoe

The Brooks Ghost 14 is one of those running shoes that doesn’t stand out as the fastest, lightest, or most cushioned, but strikes a nice balance that makes it an outstanding choice for a large range of runners and uses.

Some people might think the 12mm heel-to-toe offset is a bit much. Others will note that the shoes weighs in at 10-ounces, a full 1.5-2 ounces more than some lightweight running shoes available today. It features Brooks’ DNA Loft midsole EVA foam which doesn’t have quite the bounce of some more highly engineered midsoles in current racers.

However, these are all relatively small complaints from runners with very specific requirements in their shoes. The Brooks Ghost 14 excels by hitting the right combination of features for the large segment of runners looking for a smooth, reliable ride that will last hundreds of miles, and won’t aggravate their feet or Achilles. The Ghost 14 provides the support and comfort most runners look for in a daily trainer.

Some quick features to highlight before we get into the details. The Brooks Ghost 14 running shoe features:

The Ride of the Brooks Ghost 14 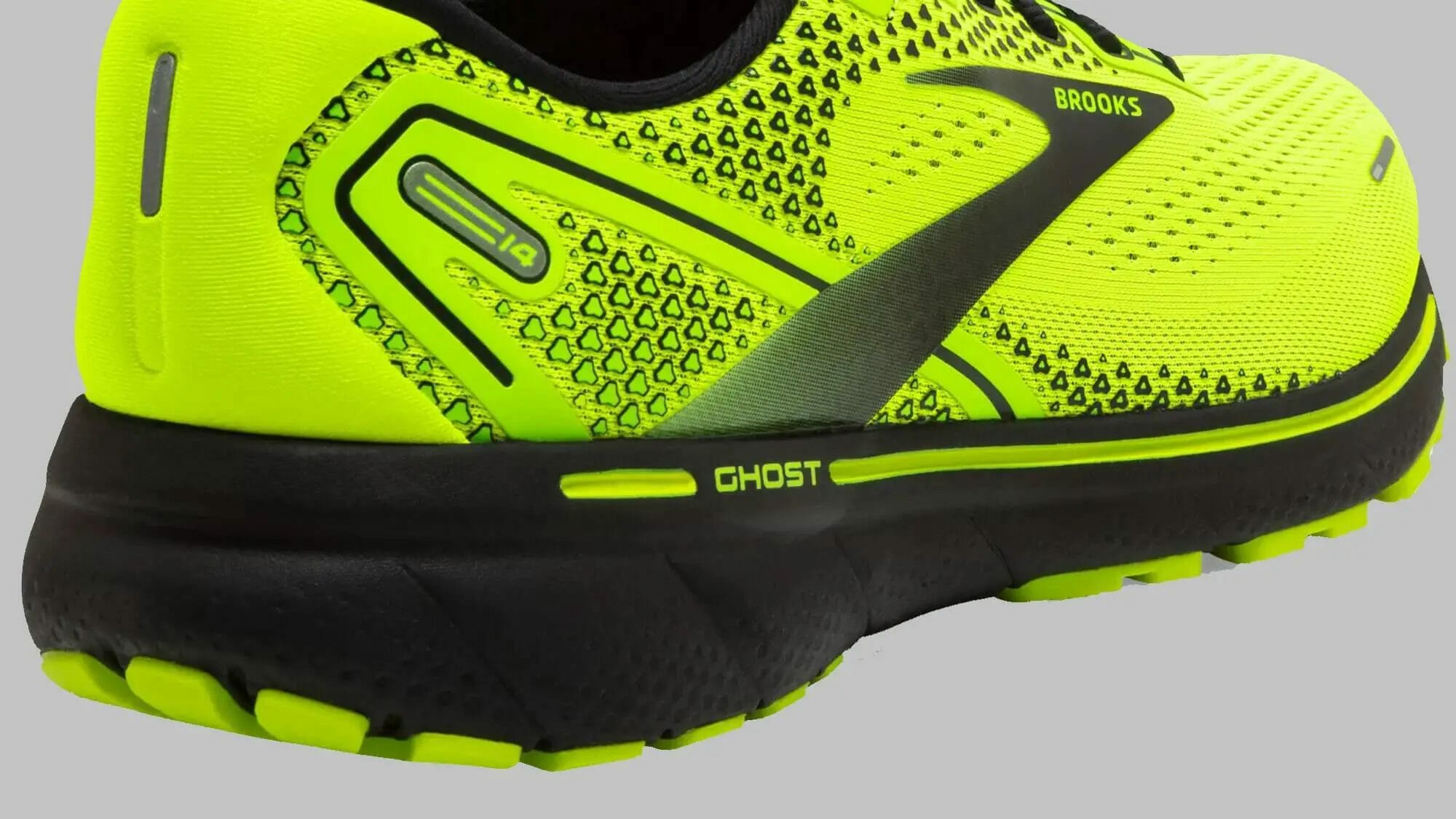 Let’s start with the full length EVA foam (called DNA Loft by Brooks) midsole cushioning. Starting with the Ghost 13 and continuing with the 14, Brooks switched from the common dual-density setup, to having the entire midsole feature a single slab of DNA Loft foam. This means the Ghost 14 does not feature a separate heel crash pad with a different foam density.

Prior to this, the full-length DNA Loft foam featured only in the more expensive Glycerin line of running shoes. Typically, we’d call this an upgrade from the earlier iterations of the Ghost. However, you won’t notice a big change in the responsiveness, the shoe is no lighter, and the Ghost 14 is about as soft as previous versions.

What the full-length single-density foam does provide is a smooth heel-to-toe transition, and extreme comfort in daily runs. This is a reason we recommend the Ghost 14 as one of our top picks for runners dealing with plantar fasciitis. 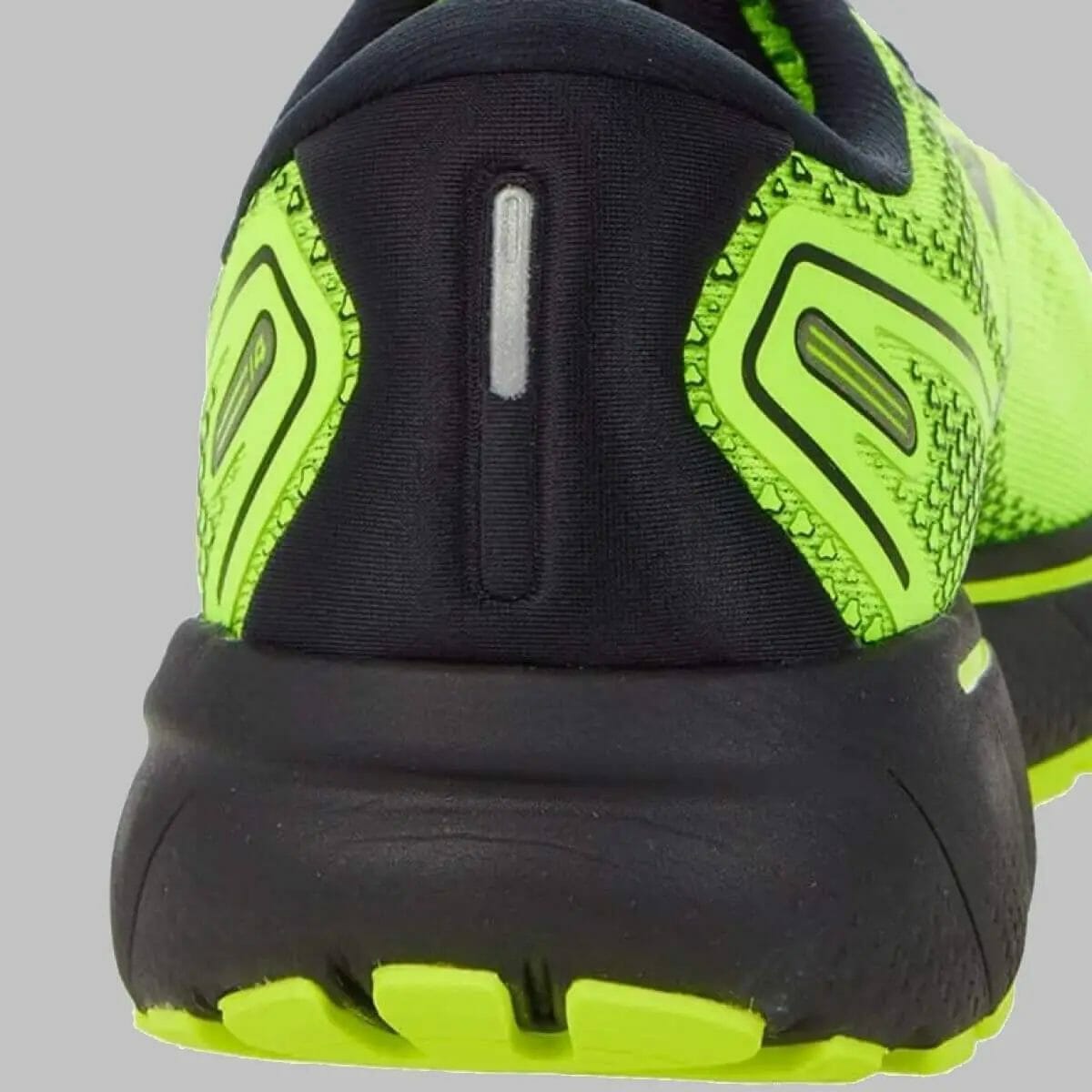 Featuring a 12mm heel-to-toe drop, the sloped midsole allows Brooks to concentrate most of the padding into the rear of the shoe. This works best for rearfoot strikers.

Further, the Ghost 14 weighs in at around 10.2 ounces (picking up 0.2 ounces from the Ghost 13). This suggests you’re getting a solidly built running shoe that won’t dazzle you with its lightness. Our experience is that this suggestion is accruate.

The Brooks Ghost 14 features a tough carbon rubber outsole at the rear and a softer rubber compound through the midfoot and forefoot. This is identical to the last several iterations of the Ghost and works well, in our opinion (and in the opinion of the large number of fans of the shoe).

Like other Brooks running shoes, traction is very good. With the Ghost 14, Brooks added “micro-openings” to make the ride smoother, but it’s not something that makes a noticeable difference to most runners.

Soft and Cushioned without Overdoing It

As with many of Brooks’ recent running shoe offerings, the Ghost line seems to get softer from iteration to iteration, and the 14 is no exception. However, it avoids the trap of becoming too soft that some other running shoes fall into.

Also, since this shoe features a removable insole, you can get some control of the top layer of the midsole, and add (or remove) a bit of cushioning to suit your feet. As mentioned above this is especially helpful if you have foot conditions, and also allows custom arch support or other orthotics. This is why the Ghost 14 features on our list of the best running shoes for flat feet.

Overall, the DNA Loft midsole is a medium soft foam that avoids become mushy. This balance makes puts the Ghost 14 into the supportive neutral category. If you’re looking for something that provides more support, the Brooks Adenaline GTS 22 might be worth a look.

Responsiveness is not the strongest aspect of this shoe. It does not have the springy take off you might expect from some of the next generation foams available in other running shoes right now. Brooks designed the midsole here to provide a high-quality, padded feel that smooths out bumps and unevenness in the road. Again, this shoe maximizes comfort at the expense of speed and performance. 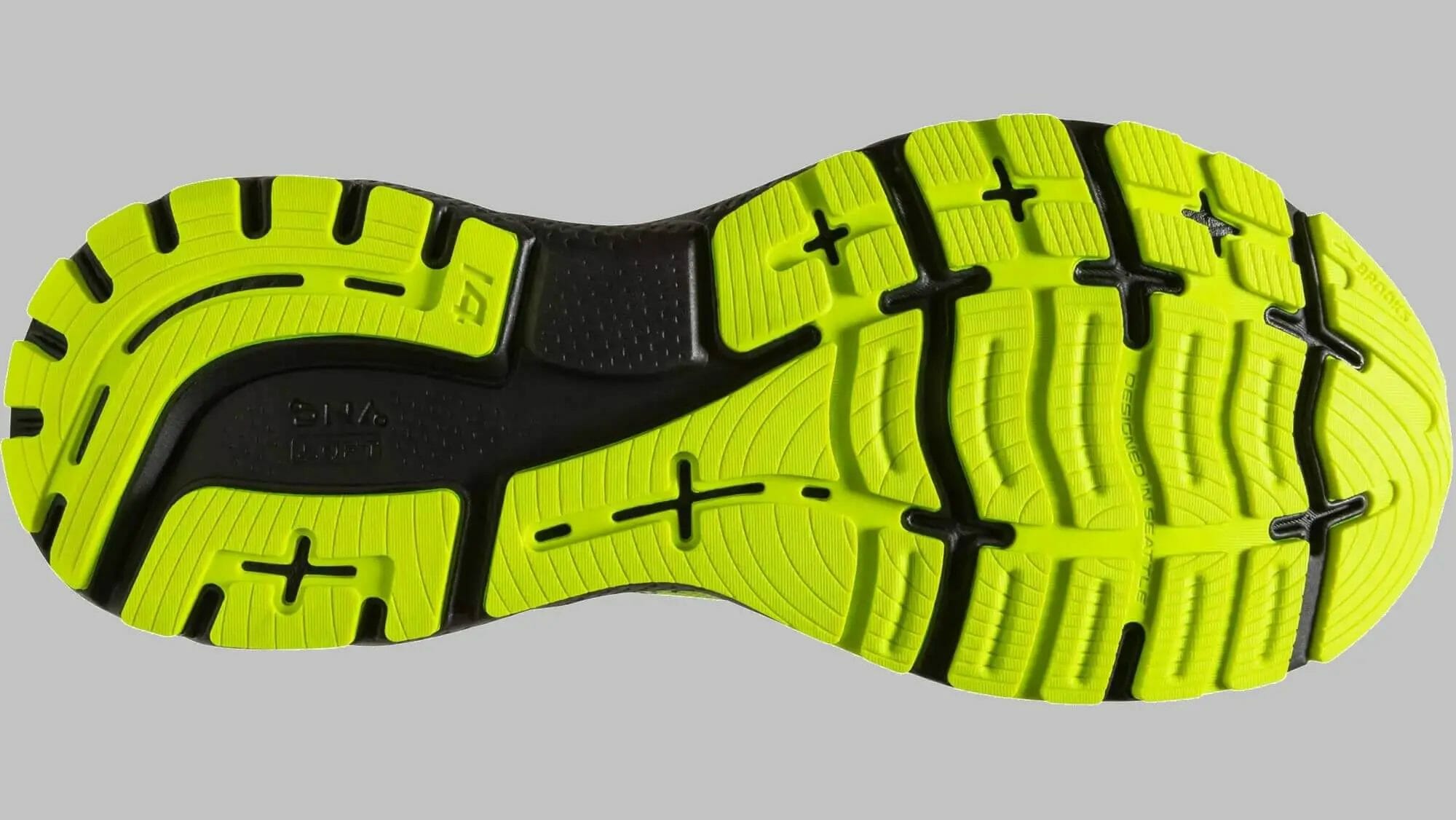 Although the Ghost 14 is definitely a neutral shoe, there is a slight outward bias to the midsole. The medial (inner) side features a slightly more solid mold compared to the lateral side. However, it’s still firmly in the neutral running shoe category.

As with the Ghost 13 before it, we recommend you test out the Ghost 14 a bit before buying it (or buying it from somewhere with an easy return set up) because the lack of a separate heel crash pad does feel different if you aren’t used to it. It provides a smoother transition, but it means the shoe provides a bit less support than earlier versions. Brooks did add a centering groove under the heel to help with stability and transition, masking some of the difference.

We’ve already mentioned a lot of similarities between the Ghost 14 and Ghost 13. So are these just the same shoe with a new number? Is there anything new and different happening with the Ghost 14?

To be honest, there’s very little that Brooks changed in this model update. We didn’t try a blind run test (is that a thing?), but suspect we’d have a hard time distinguishing the 13 and 14 just by the feel.

However, this isn’t a bad thing! Brooks designs the Ghost line of running shoes to give runners a consistent middle-of-the-road everyday trainer, and the technology and needs in that segment has not changed. With the Ghost, you know exactly what you’re going to get, and it isn’t about flash, new updates. It’s a shoe designed to get you from point A to point B, and keep your feet, heel, and joints well cushioned and protected while doing so.

The Ghost 14, like the Ghost 13 makes a great running shoe for your rotation. It’s the everyday workhorse, and we recommend it very highly. The smooth and supportive ride works especially well if you’ll benefit from the soft, cushioned ride and don’t need the lightest, fastest shoe on the market.

Materials, Design, and Fit of the Upper

The consensus here and at various online sources is that the Brooks Ghost 14 fits true to size with no substantial change from the Ghost 13. One area that does get some mentions is that the toe box is a little shallower than most other running shoes, so the big toe might press up against the top of the shoe. 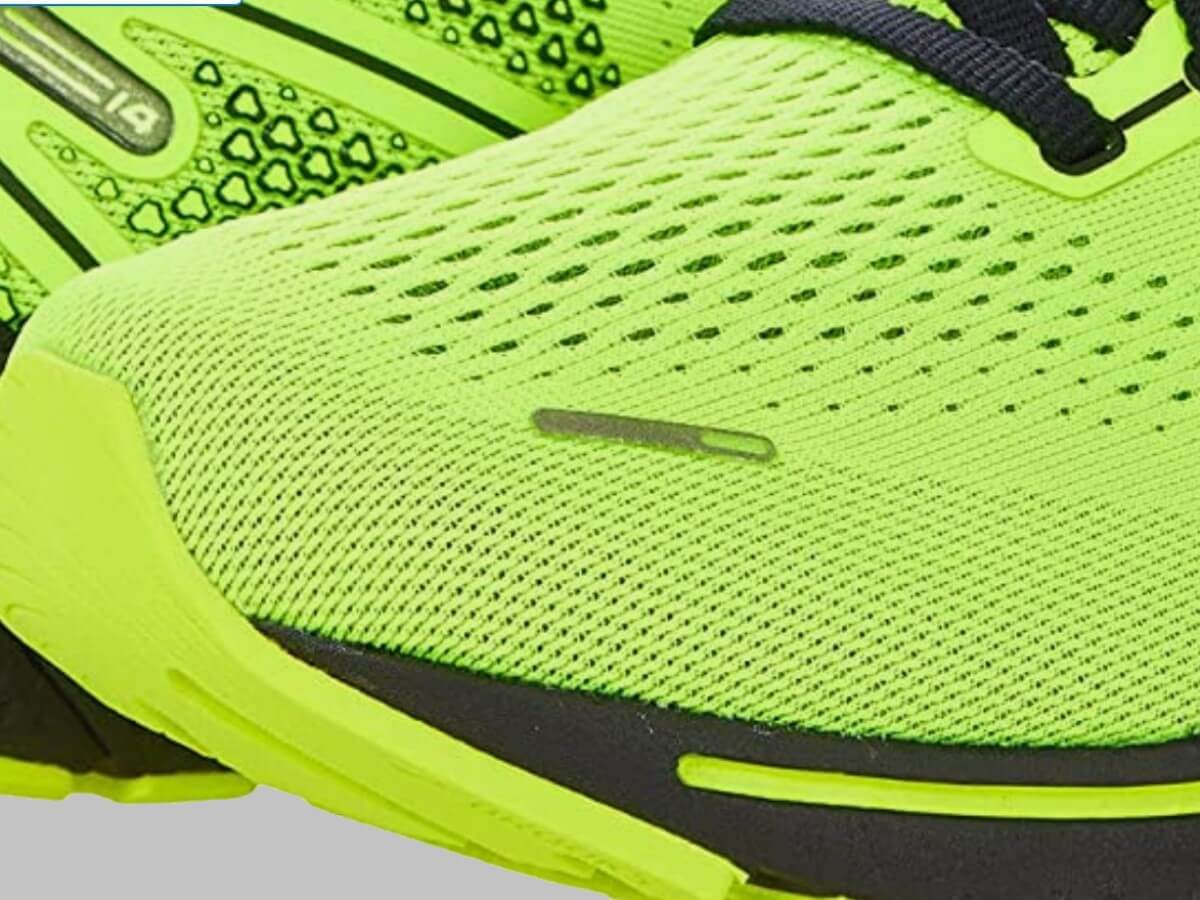 The up close detailed photo of the upper material shows the larger engineered vents in the mesh upper. There’s also a tighter weave right around the upper where it meets the sole of the shoe to increase durability.

It’s also worth noting that the Ghost 14 (as with the rest of the Brooks lineup) has a more defined, fitted forefoot than most competitors. This gives the shoe a firmer fit, but can feel a bit tight. For this reason, Brooks offers the Ghost in Narrow (2A), Medium (B), and Wide (D) sizes. It’s more important here to get the correct width so that fitted forefoot is correctly sized for your feet.

Overall, the Ghost 14’s upper meets all the criteria you should look for in a high quality running shoe. It’s comfortable, stable, fits securely around your foot, and has a seamless, smooth interior that won’t cause blisters or irritation. These also feature a highly padded tongue and soft, round laces. Even when we tightened them down the tongue distributed the pressure nicely, so there wasn’t any particular pressure points on the top of our feet that would cause pain during a run.

These shoes also feature reflective material on the forefoot and heel, as in previous models. It’s not a lot of material though, and if you’re running at night or in low-visibility conditions, you’ll definitely want more high visibility clothing to stay safe.

One area that Brooks played around with in the design of the last few Ghost models is the shape and design of the tongue. The Ghost 13 tongue got a bit of criticism for its tendency to slide a bit while running. With the Ghost 14, they’ve tried to tweak the design yet again to reduce that slide. For us, they succeed, but it’s something to keep an eye on.

The downside to a plush, padded upper is that this shoe will retain water in wet or rainy conditions. It also takes forever to dry out if you get them wet. Brooks does offer a waterproof version (The Ghost 14 GTX) with GoreTex on the upper, but you’ll have to pay extra for that version. If you’re often running in the rain, or can’t be bothered to dodge puddles, it might be worth the extra investment.

The differences between the Ghost 14 and Ghost 13 are minor. Brooks delivers incremental improvements to the shoe without making a major overhaul of the winning formula that makes it one of most popular running shoes available today.

However, there were a few tweaks and updates that are worth mentioning:

Comparison of the Brooks Ghost 14 with Other Models

Like we’ve said already, the Brooks Ghost is an everyday trainer, and makes a solid choice for a huge variety of runners. It’s not too flashy, but provides great quality and comfort.

These shoes both show up on our recommendations for runners with foot issues. However, we’d lean toward the Glycerin if you have greater plantar fasciitis pain, or greater pronation issues.

However, the Adrenaline GTS features stability “GuideRails” along both the lateral and media sides in the midsole that correct pronation in your run. Not everyone pronates, and amongst pronators, some prefer not to use a stability shoe. The Ghost is a good choice if you don’t like a stability running shoe, but still want a soft, cushioned ride with a generous and soft stack.

Overall, we recommend the Ghost over the Adrenaline GTS unless you are specifically looking for a stability shoe.

Branching away from the Brooks family, another similar offering is the Mizuno Wave Rider. The Rider features a similar larger-than-average heel-to-toe drop and a comfortable, cushioned ride. The Ghost features a bit more cushioning (with a 3.3cm under heel stack versus 3.2cm on the Rider).

Pros and Cons of the Brooks Ghost 14 Running Shoe

Summing it All Up: The Brooks Ghost 14 Supportive Neutral Running Shoe 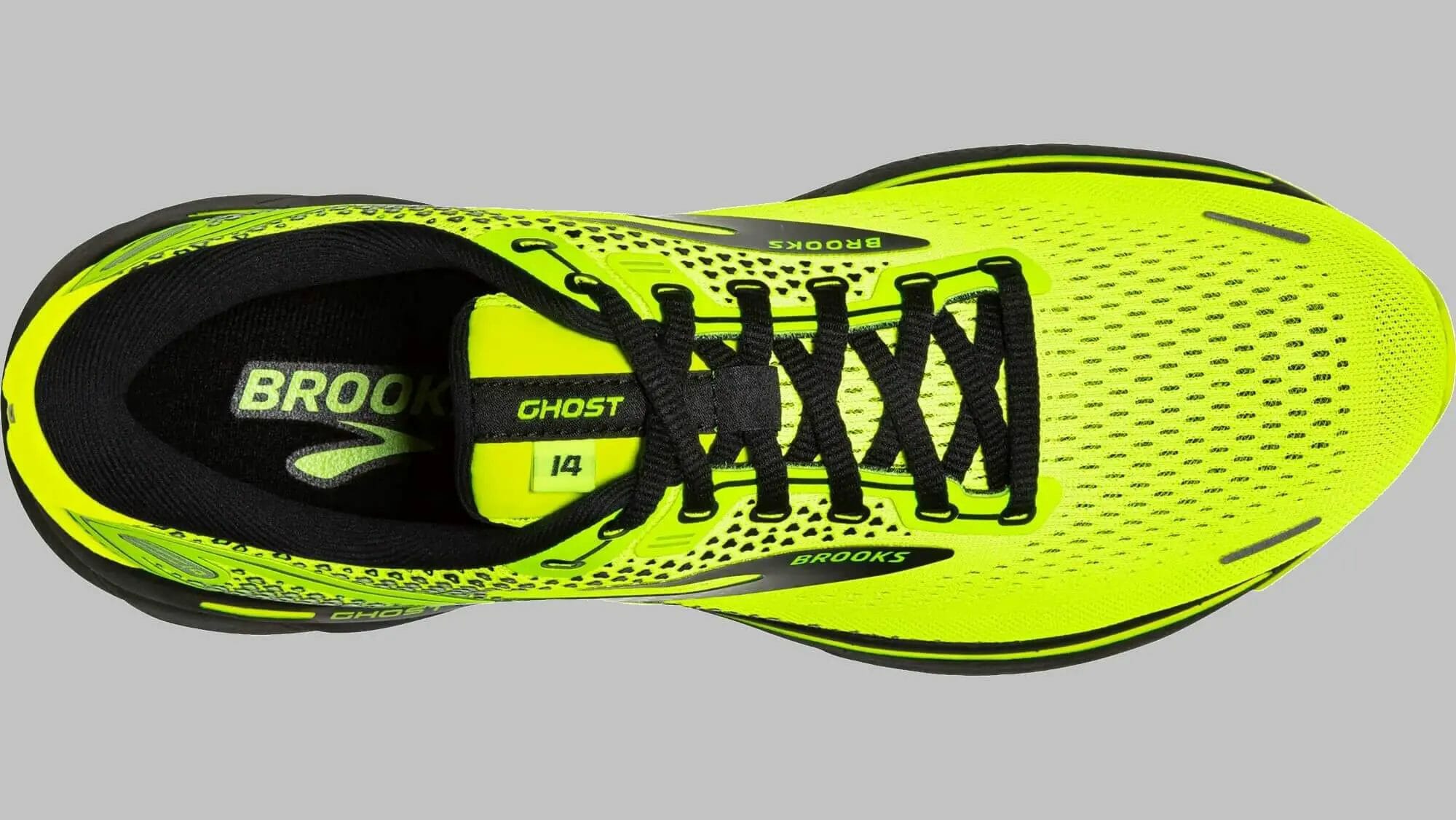 Good job, Brooks! The Ghost 14, like it’s predecessors, is all about cushioning and comfort with a smooth traditional high heel-to-toe drop design. The full-length DNA Loft midsole and upgraded rubber outsole don’t provide the most responsive ride, but do a good job of keeping your feet comfortable on medium or long distance runs.

The upper is plush, yet tight fitting. It keeps the shoe firmly attached to your feet and doesn’t provide any points of irritation.

We think this shoe is great for both beginning and intermediate runners. It’s a well-balanced shoe that gives you support and cushioning. Highly recommended!