This is a running shoe specifically designed to reduce injuries. It is a fantastic choice for a daily trainer and for long distance, straight-line road running. Logging injury free miles in comfort and style might be the tag line. The Nike React Infinity Run Flyknit 2 is one of our favorite everyday running shoes, and makes an ideal choice for runners with flat feet or plantar fasciitis.

Overview of the Shoe

At ShoeGuide, we decided it was time to put together our thoughts on the Nike React Infinity Run Flyknit 2. This shoe has gotten a massive marketing push from the folks at Nike. The big marketing claim, as championed by Nike, is that

The Nike React Infinity Run reduced running injuries by 52% compared to the Nike Air Zoom Structure 22 in a study of 226 men and women during a 12-week run training programme. Our study found that 30.3% of Nike Air Zoom Structure 22 runners experienced an injury, but only 14.5% of Nike React Infinity Run runners experienced an injury.

Then there's the grandiose marketing claims. It seems like every review and YouTube video of the React Infinity Run Flyknit 2 starts out stating their skepticism of Nike's claims.Well, we're skeptical too. But that's okay! Even if the marketing claims are a bit hard to believe, it is still a GREAT shoe. This is especially true for people who are injury-prone or have conditions such as plantar fasciitis or flat feet. In fact, it was one of our top choices for runners with flat feet and for runners with plantar fasciitis.

So even if we believe that Nike's injury study should be taken with a grain of salt, we do believe the Nike React Infinity Run Flyknit 2 is an excellent running shoe.

New Kick on the Block: The Nike React Infinity Run Flyknit 2 vs Other Nike Models

The React Infinity Run Flyknit 2 is the second model in the Infinity Run series from Nike. It addresses the biggest issues runners found in the initial Infinity Run model. The other shoe we compare this to is the Epic React. There's also the fact that Nike itself used the Structure 22 as the basis for some of its marketing claims.

The reasons for the comparisons to these models is simple: the React Infinity Run series shares the React midsole technology with the Epic React and we can think of it as a cushier, softer, more comfortable version of the Epic React.

The React Infinity Run Flyknit 2 weighs 10.7 oz (for Men's size 10), putting it on the heavier side. However, it doesn't feel heavy when running. It rides like a much lighter shoe, like a 8 ounce shoe from our experience. It also has Nike's React foam, which everybody is in love with. It's springy, light, nice, and a pleasure to run long distances in.

In addition to the React foam midsole, there is a nice, tough rubber cover over the entire outsole. It's really tough, and even after putting 200-250 miles into them, it was completely solid and not worn down to nothing like you see in some running shoes.

Further, the React Infinity Run Flyknit 2 is a big shoe. It has a 30mm heel and 22mm forefoot for an 8mm heel-to-toe drop. That is right around the maximum drop we would recommend for newer runners (since newer runners tend to do better as their lower leg strength is developing with a more neutral, lower drop, type of shoe). So, that puts it in sort of the sweet spot as a shoe that can work for newer runners, but is also definitely a go-to option for more experienced runners, particularly if they are having problems with plantar fasciitis or other foot conditions which might make them more prone to injury.

This was an obvious issue Nike needed to address. After the release of the Nike React Infinity Run v1, many people complained about the sock construction of the upper. This allowed the heel to slip while running, which no one wants. The heel slippage was worse in this case since the cushioning, stability, and motion control features of the shoe indicate it targets people with foot problems. A locked down heel is critical for conditions like plantar fasciitis as this aggravates the condition.

Hence, the Nike React Infinity Run Flyknit 2 kep the accommodating width, but ditched sock like construction and went for a well-padded rear portion, flywire lace loops that extend down the foot and connect to the midsole. There's also a plush collar around the heel to improve comfort and lock the shoe down. This is a critical improvement for runners with plantar fasciitis, other foot problems, or with flat feet. This makes the Nike React Infinity Run Flyknit 2 a huge upgrade on version 1.

While the upper on both the Nike React Infinity Run Flyknit 2 and Infinity Run 1 use Nike's Flyknit material, the upper on the Infinity Run 2 features more padding on the collar and the tongue. This addresses some complaints about the lack of padding in the original version.

We appreciate the additional padding, but are glad Nike stuck with the Flyknit upper. The shoe still has a roomy toe box and the stretchy Flyknit material allows plenty of movement. It also accommodates any foot irregularities or bunions.

The Flyknit material also breathes exceptionally well even with the extra padding. This helps keep your feet dry, and makes the Nike React Infinity Run Flyknit 2 a good choice for summer or other warmer running conditions.

Using a Men's size 10 for references, the Nike React Infinity Run Flyknit 2 weighs in at 10.7 ounces versus the 10.3 ounces of its predecessor. The extra padding, and some of the beefier construction account for the additional weight. We think it's well worth it, as this is an everyday running shoe. The extra comfort you get will more than make up for that half an ounce.

The outsole design and materials are identical. The full toe-to-heel coverage with various grooves and patterning remain. We had no issue with the outsole or traction on the first version, so are perfectly happy to see it remain consistent with this version.

The Nike React Infinity Run Flyknit 2 continues to feature the subtle rocker geometry of the Infinity Run 1. This allows a super smooth transition from heel to toe. We wouldn't go so far as to say this is going to feel like a Vaporfly Next 2, but you might notice some similarities. The one possibly controversial holdover is the arch support. There's a beefy arch support in the Nike React Infinity Run Flyknit 2 that some people don't like. Of course, it's the selling point for others. Again, this arch support is a reason we recommend this shoe for runners with some foot conditions. If a heavy arch support feature bothers you, then take note.

Yup, it's still expensive. One day we'll write one of these and Nike will have cut all it's shoe prices in half. But today is not that day. We do think the durability in these provide a reasonable value proposition though.

This is an everyday trainer, no doubt. The slightly heavier weight of 10.7 ounces, coupled with the tough rubber cladding on the outsole make it pretty clear that this is meant for day-in, day-out long-distance road running. The Flyknit upper should help keep your feet cool, and mostly takes this shoe out of the running for off-road or trail running.

Part of what we here at ShoeGuide liked so much about the Infinity Run was that it was an unapolagetic daily trainer, but it still had a bit of pop to it. So many daily use shoes tend to be, well, a bit boring. You put them on and almost before your feet hit the ground you are already mentally into the slog of a long, dull training run that is more about logging some miles than any real joy. While we wouldn't say these Nike's are speedsters, they do have some zap to them.

A lot of that comes down to the React midsole, which we've already mentioned briefly. This beefed up midsole is very soft, making it particularly useful for long-distances at moderate speeds. It is not a racing shoe, and really isn't ideal for twists, turns, and hills.

It is absolutely perfect for provide cushioning and comfort at a relaxed pace on long, mostly straight runs. This is another reason why we think it's ideal for those trying to get some running in with plantar fasciitis. You don't want to be doing anything too fancy, just logging miles to build up some foot strength and promote healing. That's what the Nike React Infinity Run Flyknit 2 excels at.

Highlights and the Ride Experience 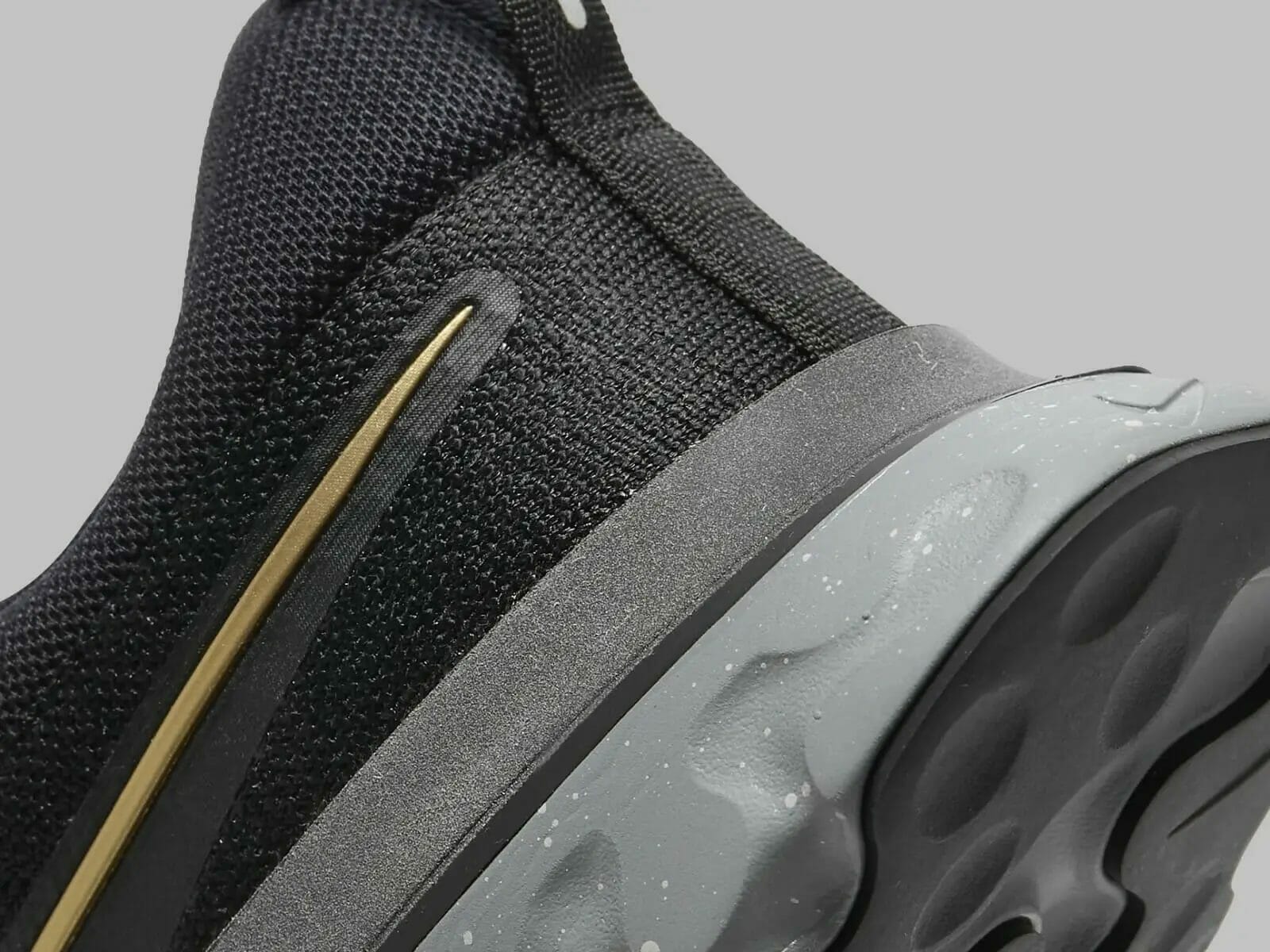 The materials and overall appearance of the React Infinity Run Flyknit 2 is similar to the Epic React, maybe a "beefed up" Epic React is a good way to describe it. However, the similarities don't really extend all that much farther.

Other than the sheer size of the midsole, one of the first things you might notice when looking at the Infinity Run 2 is the flare all around the outsole. The midfoot is flared, the heel is flared. There are really two reasons for this: increasing the volume of foam underfoot so that the shoe creates greater cushioning depth, and to create greater proprioception as you're landing. That's just a fancy way of saying that the wider base increases your awareness of where your body is in space and where your feet are. This way you get a firm foot plant on the ground and a more firm foot bedding on every single foot strike.

Because of all of this, rather than calling this a stability shoe, we might be tempted to call it a maximum cushioning running shoe. It really does make long runs much easier on the feet, heels, knees and legs.

Pros and Cons of the Nike React Infinity Run Flyknit 2 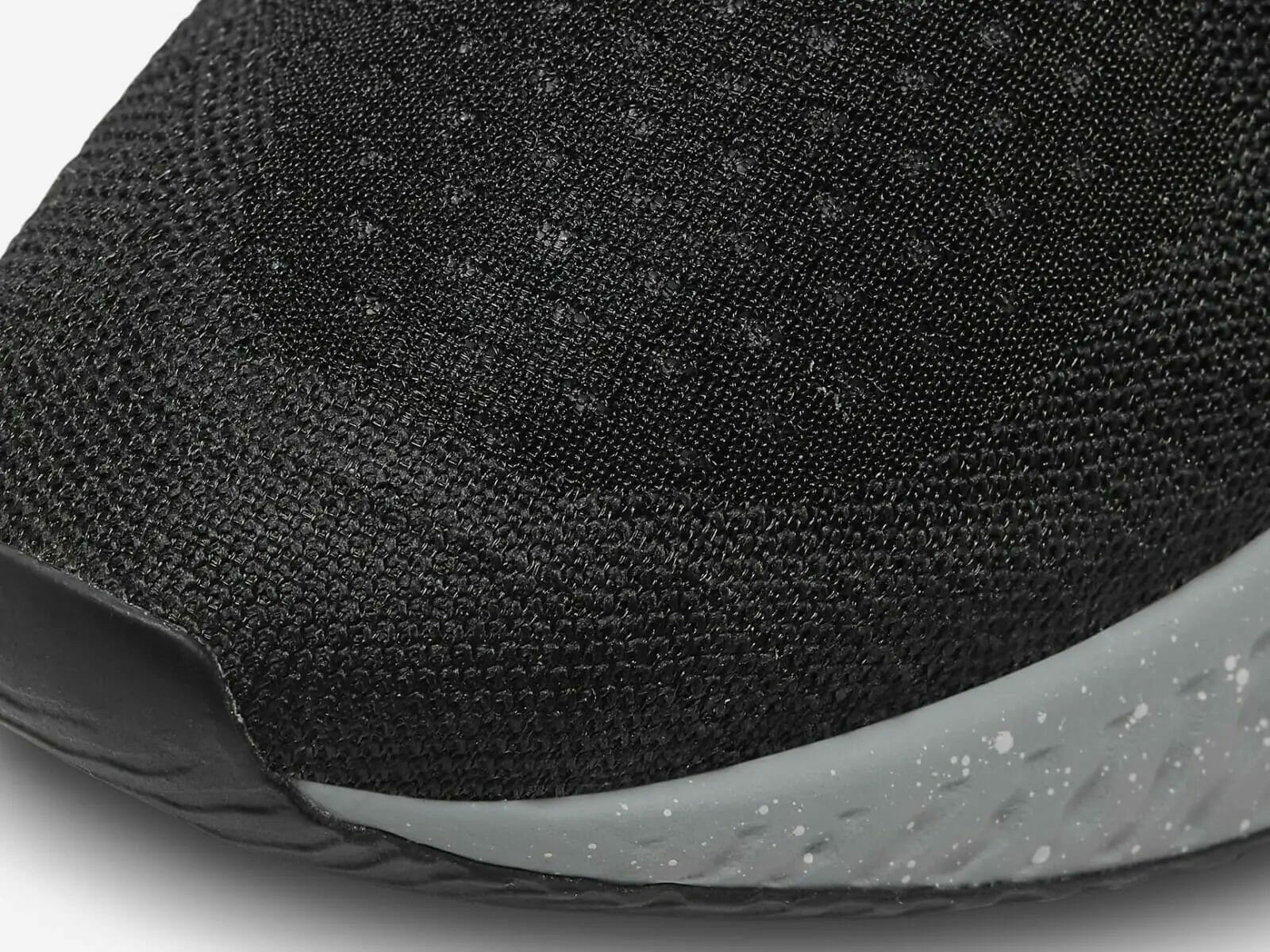 We've said a lot of nice things about the Nike React Infinity Run Flyknit so far. However, with any running shoe there are going to be pros and cons. Some of these may apply to you, some may not. Here's our quick run down, bullet point formatted list of things to watch out for or features that might be particularly helpful for your running.

To be honest, we like the single-mindedness here. Nike didn't try to create a shoe that would do everything for everyone. They set out to create a daily trainer, made for the road, with the specific goal of reducing injuries and providing a soft, comfortable ride. When you limit the number of things you're trying to accomplish with a product, you can accomplish those things in a better, more comprehensive way.

You can check out prices, more reviews, videos, etc., at these retailers that carry the Infinity Run 2.