Home » Uncategorized » The Origins of Shoe Use 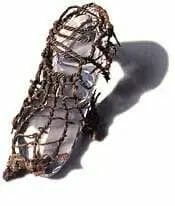 It is probable that the first shoes were worn by ancient man in the Ice Age, around 500,000 years ago, out of necessity to protect against the harsh climate. Historians hypothesise that indeed footwear must have been necessary to deal with the conditions. However, protective footwear similar to the modern-day shoe is considered to be a much later development.

It has been difficult for archaeologists to determine exactly when humans stopped going barefoot, however, because the plant and animal materials used to make prehistoric shoes is highly perishable. However, scientists have suggested that strong protective first came into widespread use between 40,000 and 26,000 years ago. These dates were established by examining the foot bones of early modern humans from 10,000 to 100,000 years ago. Humans from 100,000 to 40,000 years ago have stronger and thicker small toes that those of around 26,000 years ago. It is suggested that due to the support that sturdy footwear provides the extra grip that small toes provide are less important, and as a result people developed weaker little toes.

Currently, the earliest use of shoes that hard evidence supports is the end of the Upper Palaeolithic period, and the end of the last Ice Age, around 10,000 years ago. Ancient paintings in caves located in Spain and in the south of France clearly depict people wearing shoes. Further supporting evidence exists in the form of tools constructed from rock found in these caves that were designed to scrape the animal skins that would have been used as part of the process of tanning. This tanned leather could easily have been used to construct shoes. The oldest shoes that have bee discovered are around 9,000 years old that were discovered in California. Shoes from about 5,000 years ago were found on a preserved “Ice Man” that was discovered in the French Alps.