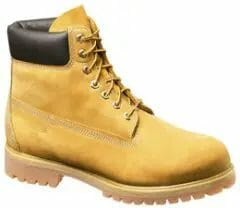 Timberland is a manufacturer of footwear and is particularly well known for its waterproof boots. It was one of the first companies to using injection moulding in footwear and they used this to fuse the sole to the leather upper without stitching, that created a very waterproof boot.

In 1918 in the USA, Nathan Swartz began his boot-making career as an apprentice stitcher. He made boots for a number of years and the in 1952 he bought a 50% share in The Abington Shoe Company. Three years later, he bought the remaining share. Together with his sons they made shoes for other manufacturers for around 10 years. In the 1960s, the Swartz family introduced injection-moulding technology, which they used fused the sole to a leather upper without stitching, creating a truly waterproof boot.