Are you looking to get more into your hiking on ice, but not sure where to start when it comes to gear? Do you just need to get safely around the neighborhood without risking a serious fall on ice covered sidewalks and driveways? Well, we're here to help with this comprehensive look at the best ice cleats and crampons for your shoes. 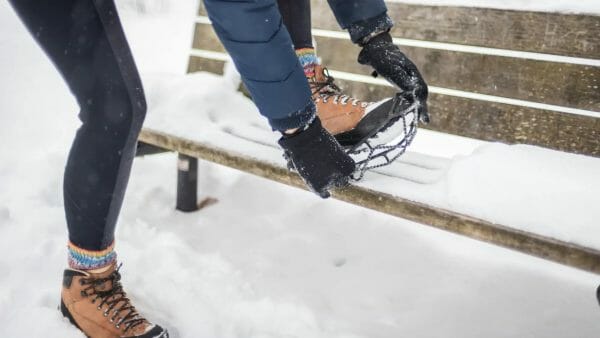 First, you want crampons that suit your needs. Just like when you're buying running shoes, you don’t want to get the wrong pair.

That's why we included two really different things in our comparison chart. We have ice cleats you can strap on to your boots to get around town without slipping. We also have crampons for serious hiking and mountaineering in icy conditions.

So, if you’re looking for a walking option don’t buy a rigid, highly technical product just because it’s more expensive. Buy according to your needs.  In this case something light and flexible with a strap-on binding system.

Finally, you want a set that is going to stand up to what you throw at it. If you’re buying for technical climbing, you probably want something made out of steel or stainless steel for its durability. But if you’re getting something more for glacier walks or something gentle like that, aluminum should work fine.

The Best Ice Cleats and Crampons You Can Buy

Now you know what to look for and you have a good idea of what different products are used for. It’s time to look specifically at what you should buy. Here are the ones that we think offer a great combination of quality and price.

The things that we were really looking for in our testing and comparisons were quality of constructions, durability, ease of use, and gripping effectiveness.  You don't want to buy an ice cleat for your shoes that isn't going to help you on the ice!  Similarly, you don't want to buy a product that is going to fall apart after the first use. Or one that is going to require a degree in mechanical engineering to attach to your boots.

You can check out a lot more information on crampons and ice cleats below our comparison chart! 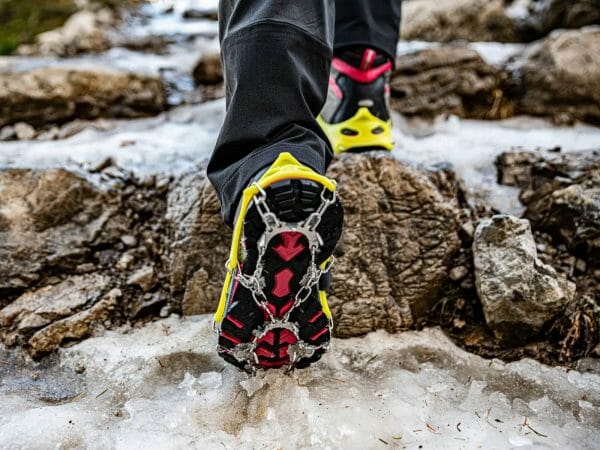 Whether you’re an advanced hiker looking to get a little higher or a day climber looking to get into mountaineering proper, crampons are probably going to be one of your first purchases. Here’s everything you need to know, including:

First off, what are crampons? Essentially, they're metal spikes that you attach to your boots. This gives you lots of traction on ice and lets you climb up slopes.

Basically, they’re like cleats, just much sharper and bigger since they’re gripping into ice rather than a soccer pitch.

And like cleats, they come in lots of different flavors and colors. Ranging from trads for snowy climes and ski hills all the way up to 12 point behemoths for your Everest-style mountaineering.

The idea of adding something sharp to your shoe to stand on something slick is hardly a new concept. There’s evidence of the Romans doing exactly this as far back as 315 AD. In the 16th century (remember, Europe was a LOT colder then) European hunters attached four pointed claw-like attachments to their foot. 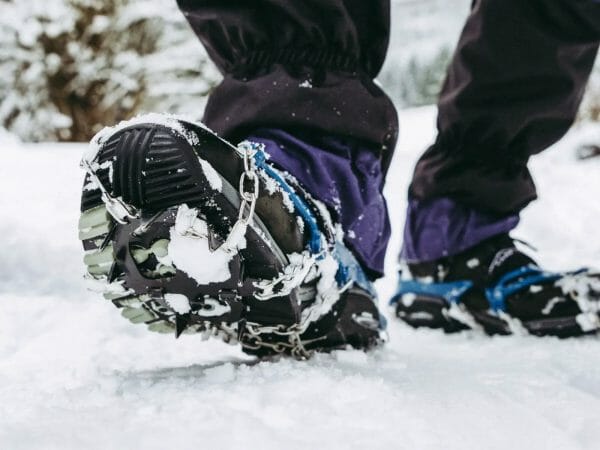 But the modern crampon really came around in the early 1900s.

Despite all their fancy buckles, clasps, and bright colors, modern crampons remain pretty much the same as they always have since they were invented in 1908 by the impressively named British rock climber and mountaineer Oscar Johannes Ludwig Eckenstein. A prolific climber in his life, he made a number of advances in mountaineering equipment, including an early version of what became the modern ice ax.

But his greatest advent was, without a doubt, the modern crampon.

Traditionally, early climbers would be aristocratic gentlemen led to the top of peaks by professional and experienced (and lower class) mountain guides.

And a major part of this relationship was the guide cutting a literal staircase through the ice and snow to the top of the peak. Nails and other sharp objects attached or hammered through mountaineering boots to provide traction, but these paled in comparison to what we use today.

After all, when you have someone cutting a staircase for you, you don’t need quite so much grip right?

But this style of early mountaineering did not sit well with Oscar Johannes Ludwig Eckenstein.

He was an early advocate of what was then called "guideless climbing" – going up a mountain on your own (and with significantly less support) than was standard at the time.

And of course, if no one is cutting a staircase for you…

What Are Your Needs?

You probably need something more than a couple nails driven through the soles of your winter boots.

By the 1920s, what would later be called the 12-point crampon was in pretty standard circulation. The two additional points added at the front to allow climbers to jam these points into a vertical (or near vertical) wall of ice and climb up.

Today, this is but one option, and not used for everything. There are also 10 point and monopolist creations, and a whole host of hybrid options for more casual climbing or less intense terrain. 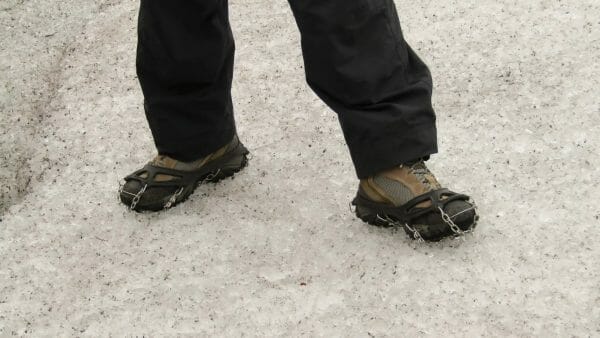 Current Use Cases for Ice Cleats and Crampons

Because of the wide range of functionalities and different types that exist today, crampons can work for everything from walking to your car in the morning all the way up to climbing K2.

That said, there are still a few key uses, depending on what type of crampon you’re talking about.

The lightest option you can get is a flexible construction crampon with nylon strap bindings.

They’re fast and convenient to put on and use. They’re also not as stiff as other options (which we’ll get to in a minute) and as such are not suitable for the more rigorous uses including waterfall climbing and steep, technical mountain climbing.

However, flexible strap-ons have their place. First off, you don’t need a special boot to use them. A rugged hiking boot will almost definitely do it.

Second, they’re lightweight and easy to attach due to the light binding and aluminum construction. If you’re not planning on using them but want to carry them just in case, these are ideal.

For these reasons, these sorts of crampons tend to be the choice for adventurous winter hikers who might only need them to cross a section of trail or for a single steep climb, ski touring where weight is a key priority, or for glacial walking, which tends to be relatively flat. 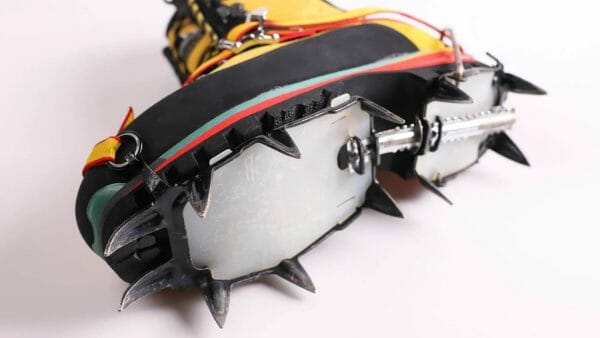 If you’re planning a more adventurous adventure, then you’re likely going to be dealing in the world of 10 and 12 point semi-rigid mountaineering options.

There are a couple of key differences that make them ideal for mountaineering.

First, the points. 12 point crampons have two points sticking out at the front which jam into a steep wall and climb up it.

Second, their construction. These products are usually feature steel or stainless steel for durability.

Third, they're are usually a style called semi-rigid, offering comfort and ease while still offering a high degree of functionality and control.

Finally, they'll often have a hybrid or step in binding, which means that you need a stiffer boot than a strap-on binding, but it does mean that it’s less likely to get stuffed with snow and gives you a more comfortable fit and control over the long term.

These can handle whatever you throw at them, but they're mostly used for technical mountaineering.

There is one final option when it comes to crampons. These are restricted to being used only for ice climbing and climbing frozen waterfalls.

They have straight, narrow points going straight out the front for extreme gripping on vertical icy surfaces. They allow climbers to kick into the ice and then "stand" on the crampons as they climb.

These types often have serrated front points for better traction and can have more or fewer points (e.g. mono point crampons) depending on conditions. Because these front points are under lots of stress and pressure, these are often replaceable. 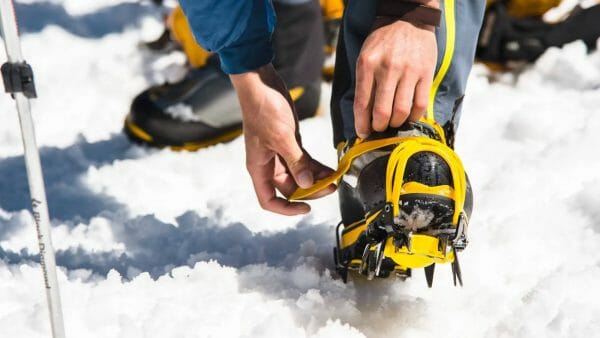 Well, there you have it. Everything you need to know about crampons so you can feel comfortable getting just the right ones for you.

Hopefully, this guide was able to help you understand what to look for, what type you need for yourself, and how to separate the good from the bad.

Whether you’re looking for a lightweight solution to get you to work without slipping over or a rugged, technical beast to take you to the highest peaks in the world, somewhere out there there’s a perfect crampon just waiting to be discovered.