If you spend time outdoors in areas with venomous snakes, chances are you already know that choosing the right snake boot is extremely important. A good snake boot must be durable and comfortable enough to make it through the long hours, hazardous environment, and unpredictable nature of the outdoor. All while keeping your feet and legs safe and protected from snake bites. 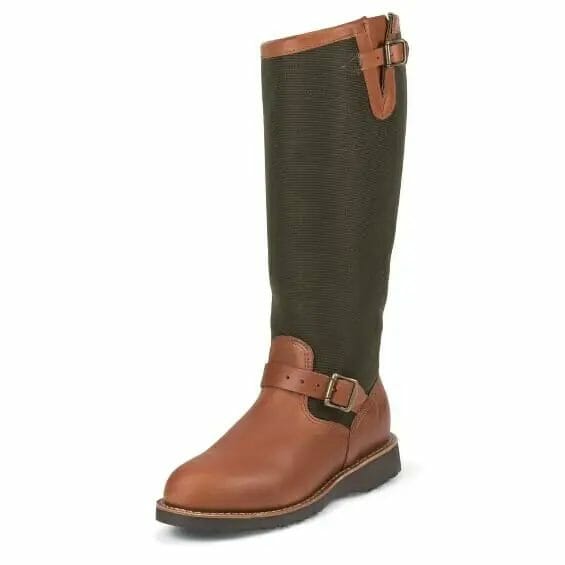 It almost goes without saying, but potentially the most important feature, a high-quality snake boot must eliminate the risk of snake bites. Wearing a snake proof boot is essential to working outdoors if there is any chance a snake could be hiding in the rocks or underbrush. Wearing anything else could result in serious, even fatal, injury as we discuss in our guide on the Best Snake Boots (https://www.shoeguide.org/snake-boots/). The Chippewa Men's Pull On Snake Boot meets these requirements and packages them in a rugged, attractive style.

Fast Facts About This Offering

If you're the kind of hunter that is always on the move in tough terrain, then these are the ideal boots for your needs. The Cordura Vipercloth upper provides 17" (or 18", depending on the model) of complete protection from snake bites. The thick leather vamp is equally effective at stopping snake bites. The solid construction without laces or zippers mean this boot will last and won't need maintenance to keep it in good shape. The Vibram sole is also a big selling point as this provides traction, durability and comfort while you're on the trail. There's no need to worry about a stiff painful sole causing foot irritation after only an hour or two outdoors. Finally, the removable orthotic insole is pretty comfortable, but can easily be replaced if you prefer something like SuperFeet. ​

Okay, we don't like to waste time tying or zipping up our shoes either, but we have to say the pull-on Chippewas were tricky to get on and off. If you have big calves, you might want to consider another boot, to be perfectly honest. However, if you don't mind a few extra minutes to get the Chippewa snake boots on and off, then you'll be well-rewarded with an extremely comfortable fit that will flex and move with you. If you're in difficult terrain, having your legs swim around in your boots can be a real problem. With two buckles for tightening, the Chippewas offer a really responsive fit, especially if you're scrambling a bit.

The most important aspect of any snake boot is its safety. Made from 80% Cordura Nylon Vipercloth and 20% leather, Chippewa is an extremely well-respected brand in the hunting and work boot world. With that name brand recognition comes quality and assurance that their snake boots will keep you safe.

As mentioned above, the two big features of the Chippewa Men's Pull On Snake Boots in the cushioning and comfort arena are the removabe orthotic insoles and the Vibram outsoles. For us the Vibram sole was a huge selling point. Not only do we trust the traction and reliability of Vibram soles, but they are just damn comfortable on almost any kind of terrain. In addition to that, these are made with Goodyear welt construction so that the sole is removable and replacable. This is good since almost without exception the sole is going to be the part of your snake boot that will wear out the fastest. Since the Chippewas aren't cheap, being able to repair the sole while the rest of the snake proof part of the boot keeps going is a big saver over the long run.

The removable orthotic insoles are made by Bontex and were not bad at all. We prefer our Superfeet insoles, so threw those into the boots with no problem at all. Having insoles that align to your feet is an underrated and often overlooked way to maximize comfort. The removable insoles in the Chippewa Snake Boots definitely make that an easy process, and one that every hunter or hiker should take advantage of.

Established in 1901, Chippewa is an extremely well-respected brand in the boot world is now owned by the Justin Boots brands. As you'd expect from such a well-known name, and such a stylish boot with high quality materials, the price isn't cheap. These are definitely at the higher end of the boots we tested: a bit more expensive than similar models from LaCrosse and Irish Setter, while in line with the Danner offerings. But, you get what you pay for, and with Chippewa you are paying for comfort, reliability and safety. The Pull-On snake boots definitely deliver on all three of those promising, and are good-looking at the same time. The most important thing is that these will stand up to long ours outside and will protect your feet and legs from snake bites.

The Chippewa Pull-On Snake Boot gives the durability and comfort of a high-end snake boot in a stylish package. It's Vibram sole means you don't sacrifice comfort and traction for rugged power. With the snug fit around the calves and upper foot, you'll be feeling quicker and lighter on the trail instead of feeling like your snake boots are wearing you.

The Chippewa Men's Pull-On Snake Boot was one of our top choices in our Comprehensive Guide to Snake Boots.